Figuring out the best formations and tactics to use in FIFA 23 can be a proper case of trial-and-error, especially if you are still not sure about which of your players are most suited to a particular system. You might have the perfect formation, but the wrong personnel or your tactical approach may not be wholly compatible with how you line your players up on the pitch.

For years, 4-4-2 was a staple of English clubs, while other teams enjoyed success with 3-5-2, before 4-2-3-1 was popularised by the likes of Barcelona and Spain, but which formation is the best for FIFA?

To help you succeed on the new game, GOAL takes a look at some of the best formations to use on FIFA 23.

The 4-2-3-1 is one of the most popular formations in FIFA. In almost every iteration of the game, it has been used by pros as their go-to, because of the defensive and attacking strengths it brings.

The formation uses three CAMS, but the LAM/RAM actually play as LM/RMs, so it plays quite similar to a 4-4-1-1, allowing you to choose to play narrow or wide. 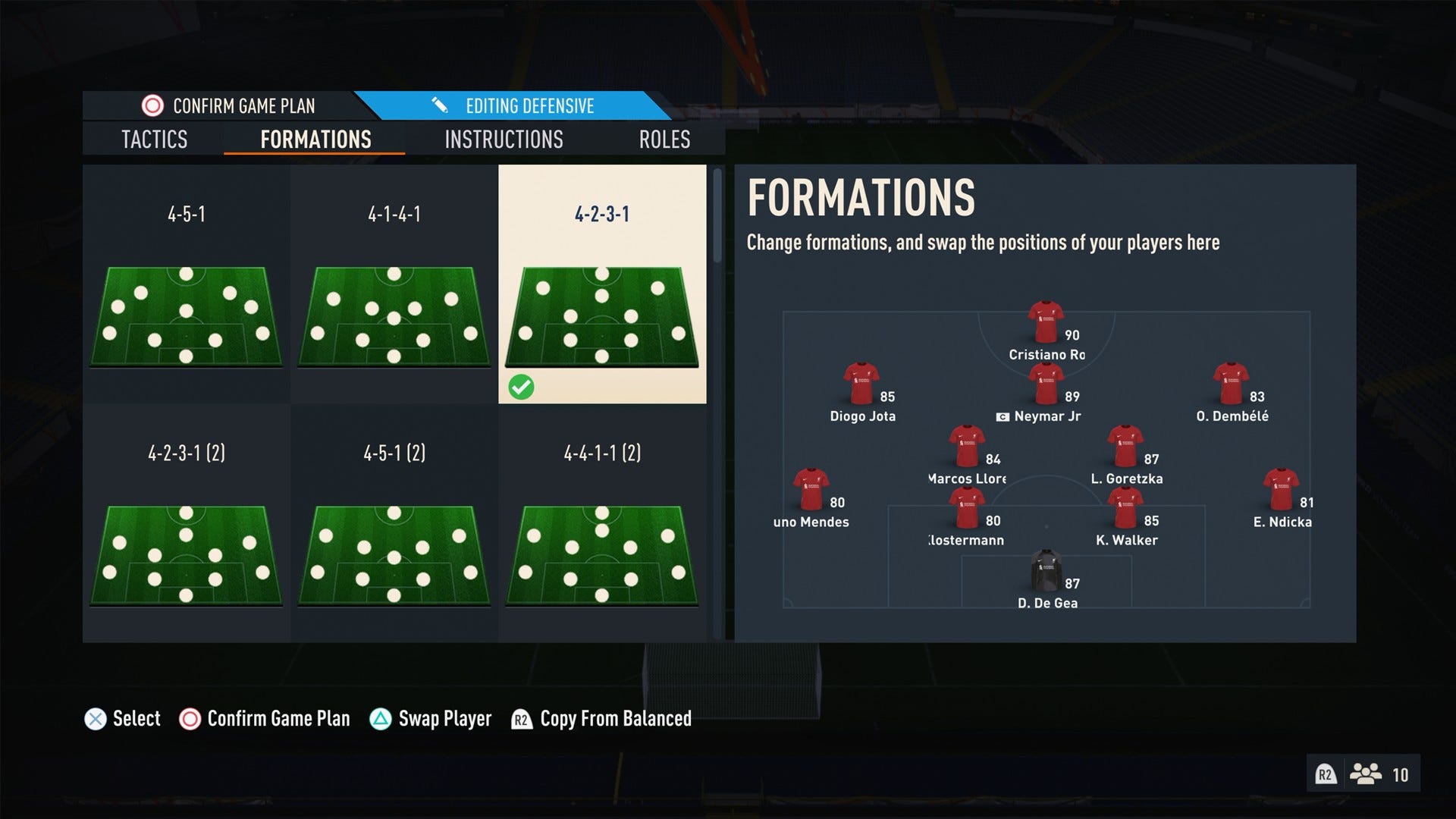 Defensively, the 4-2-3-1 is very compact. You have two holding CDMs, which provide defensive stability, and the formation can be easily adapted – by putting ‘balanced’ or ‘get forward’ instructions on a CDM you can make the player more attacking or more reserved.

The formation sees a team defend in a 4-5-1, where the CAM sits a bit deeper than other formations such as the 4-4-2, hence why it is the preferred choice of may players to close out a game, while still retaining an attacking threat. 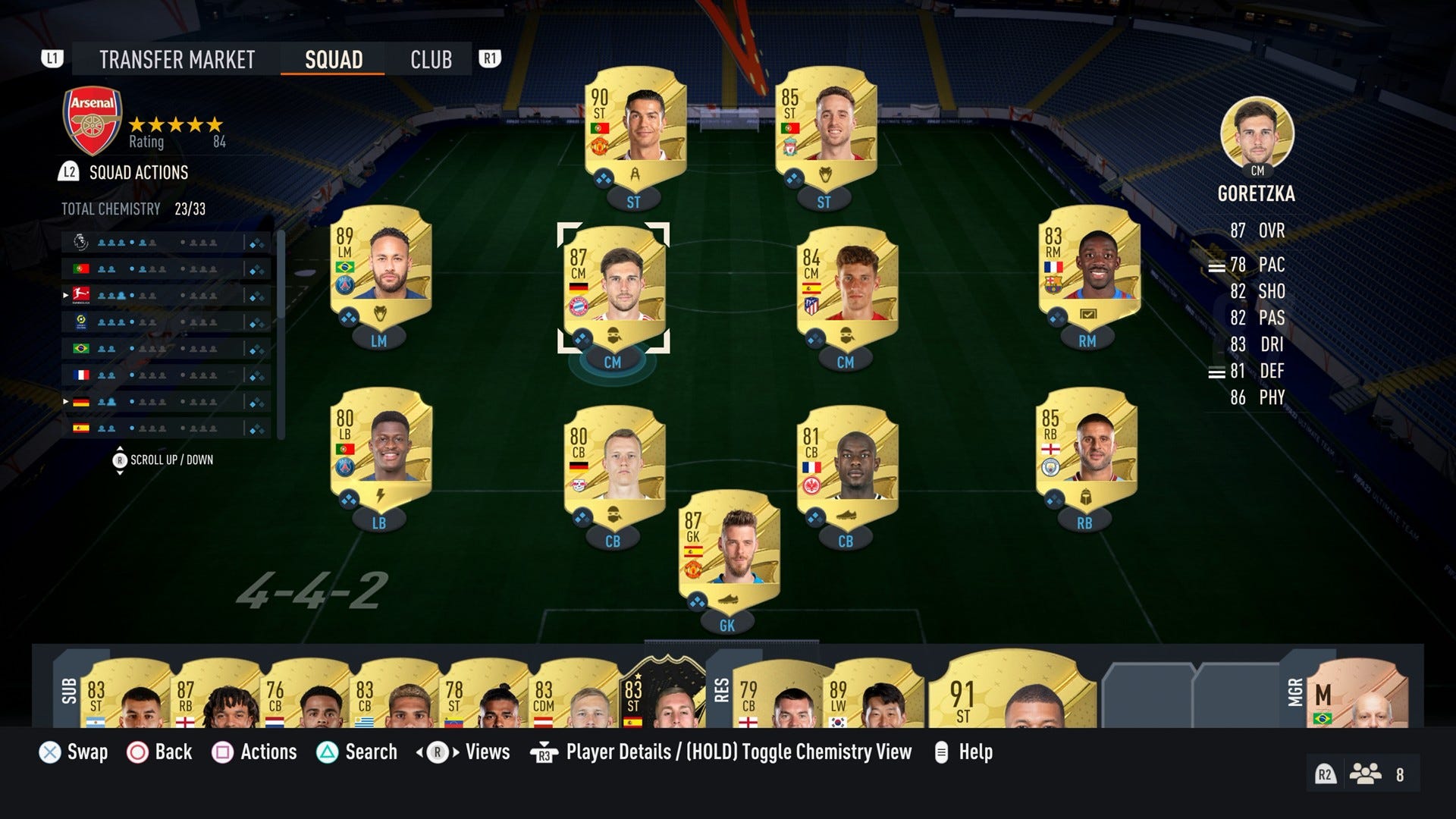 The 4-4-2 is arguably the most balanced formation in FIFA 23. This tactical approach employs two strikers, making it somewhat more attacking than the 4-2-3-1, at the cost of a lack of a CAM.

Players who are new to FIFA tend to struggle with the 4-4-2 due to the lack of a CAM, but you can always trigger a CM to provide extra support to the attack.

Perhaps the only downside to this formation is the fact that the two strikers tend to stay forward, even with the instruction to ‘come back on defence’, which essentially forces you to defend with four midfielders – unless you bring a striker back manually.

While it can be a devastating formation for pressing, some new users may prefer the 4-2-3-1 to close out a game and the 4-4-2 when they are chasing the game. 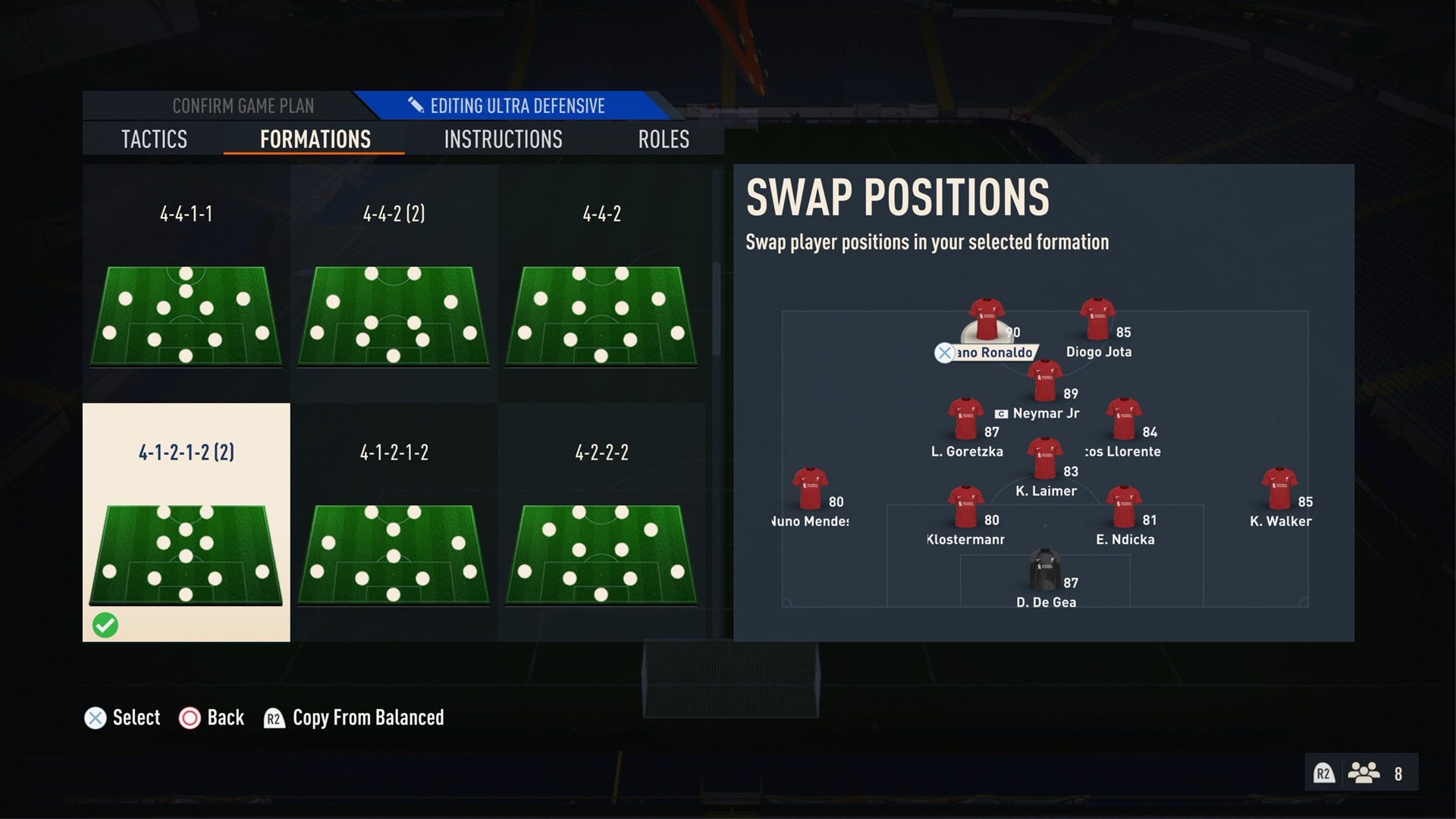 The 4-1-2-1-2 (second variation) is a common formation amongst players who like to play narrow and fast.

It is a very attacking formation due to the fact that you have a triangle of two strikers and a CAM – perfect for quick link-up play. Most notably, the 4-1-2-1-2 is used by players who like to play tiki-taka narrow and through the middle.

While the formation does not use any wingers, you can always bring your left-back and right-back forward to provide width when attacking.

It can be very useful when attacking through the central areas, because you can create an overload in the midfield, with the two central midfielders getting forward on the attack to outnumber your opponent. 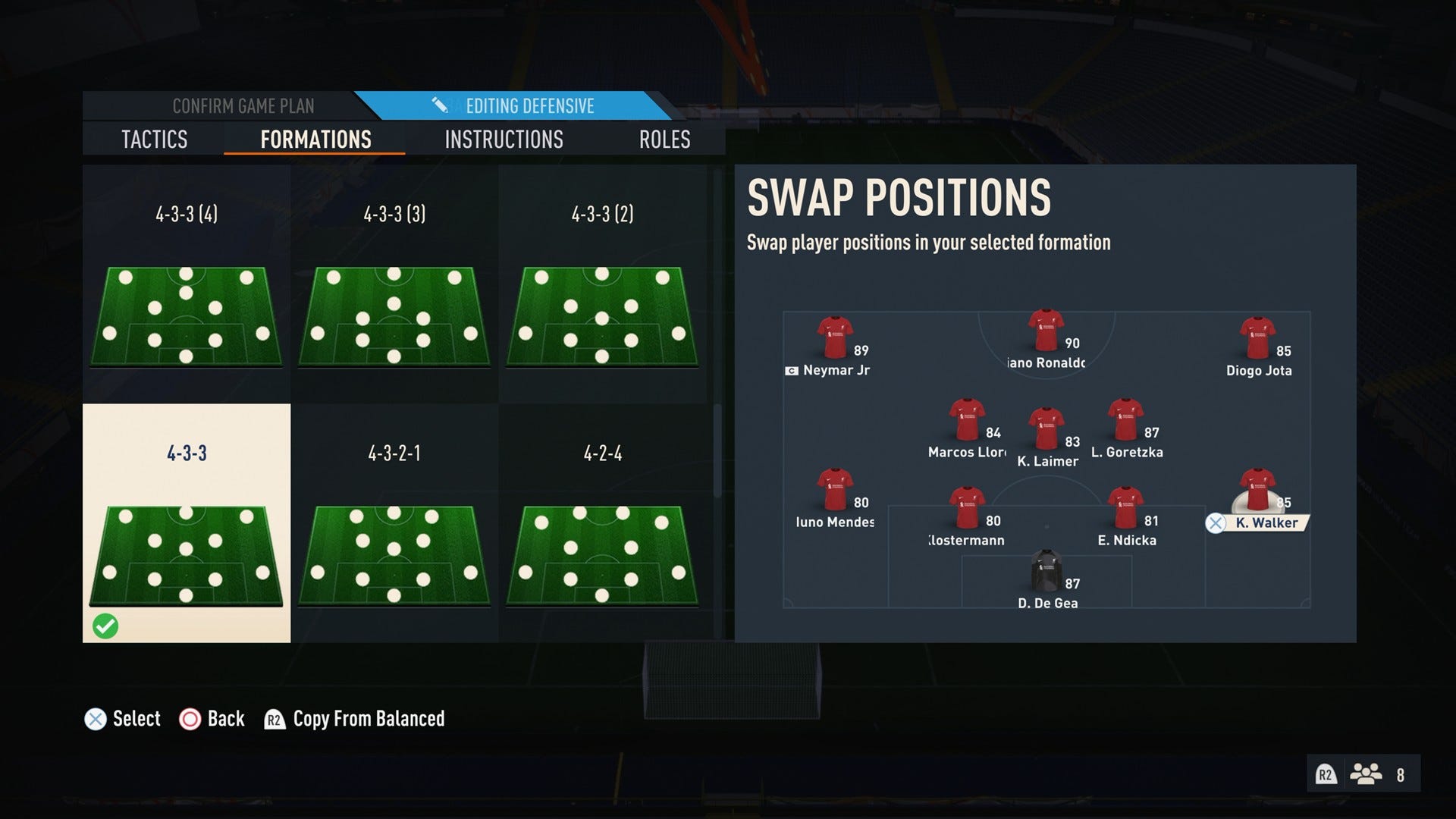 The 4-3-3 is a formation which some players prefer to not use, as the the striker can get isolated. However, for players who enjoy a slower, progressive style of play, or generally enjoy a possession game, the formation may be their first choice set-up.

The key area of attack with this formation is the midfield and outnumbering your opponent is vital here. The L1/LB triggers push your midfielders forward and use of one-two passing is crucial to ensuring success with this formation.

Some FIFA players also prefer to use the 4-3-3 to pack out the midfield when they are defending a lead, opting to position their three midfielders tightly in the central area. 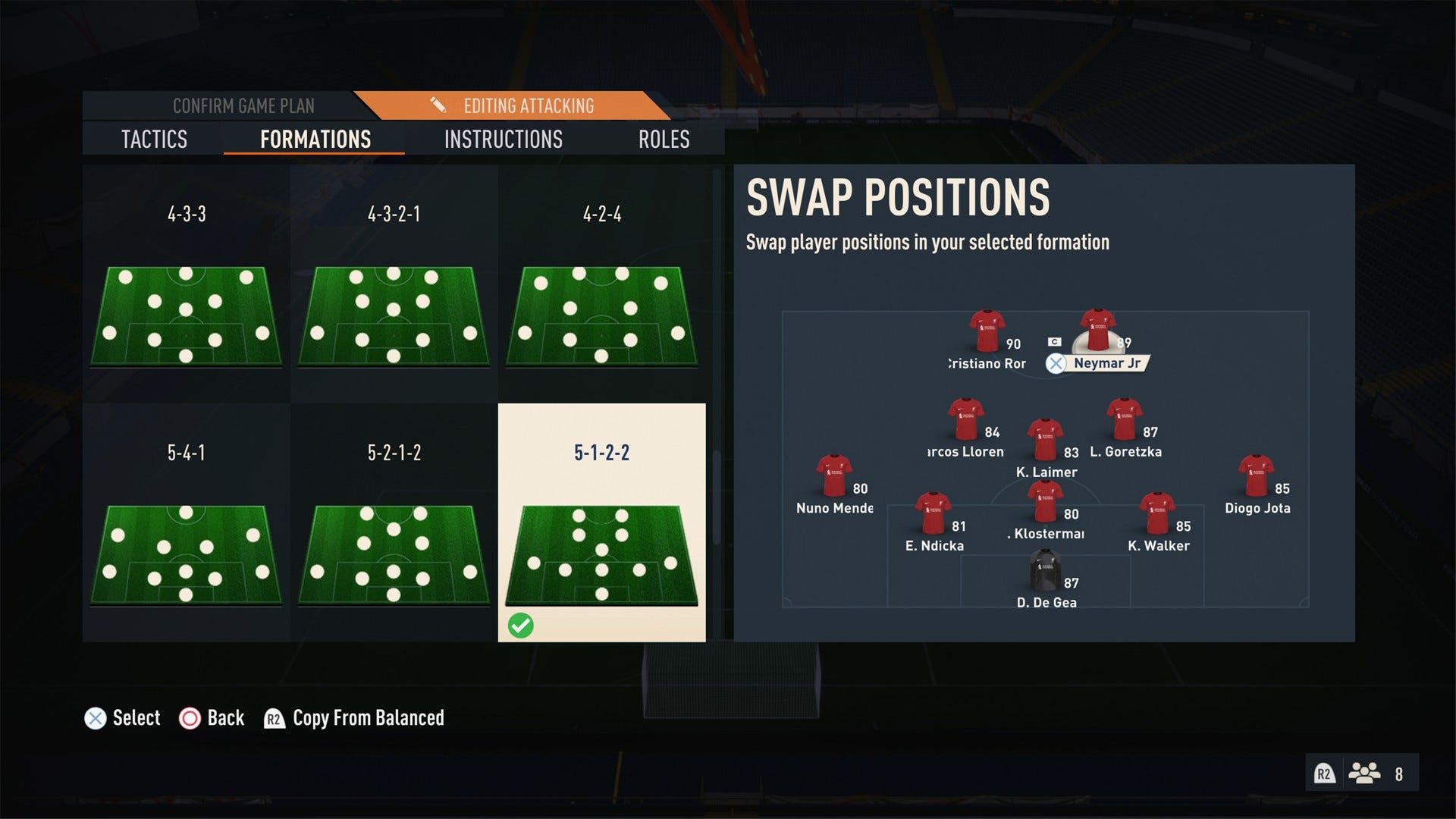 The key to 5-1-2-2 is the CDM. In previous editions of FIFA, variations of the 5-3-2/5-2-1-2/5-4-1 never had an out-and-out CDM. The gap between the midfield and the defensive line thus made these formations more attacking in outlook.

In FIFA 23, the CDM in the 5-1-2-2 changes this set-up completely. It is a formation which allows your wing-backs to attack and when they go forward, they can remain relatively unmarked.

Not only do you have width down the flanks, you can attack in a narrow system, but defensively you are stable with a back line of five, a holding CDM and two centre midfielders providing defensive support.